Victoria Capital Partners is managed by one of the most experienced private equity teams in South America, members of which have been working together for an average of more than 19 years and have helped pioneer private equity investing in the region beginning in 1995. Victoria Capital Partners’ regional approach provides its investors with broad diversification by country and emphasizes relative value in different cycles across the region. Victoria Capital Partners actively customizes and refines its strategy for each country according to the prevailing trends, opportunities and risks within the relevant market. The Firm generally targets control, joint-control, and significant minority positions with active board participation, value creation involvement and contractual governance tools.

The Firm is active in Argentina, Colombia, Chile, and Peru.

Victoria Capital Partners’ vision is to create the premier private equity house in Latin America by generating superior returns to our investors and building a long term relationship with our partners, within an environment of professional excellence and by adhering to the highest ethical standards.  Our investment activities and day-to-day work are guided by the following principles:

Under this agreement, São Pedro Capital was appointed the local manager of certain FIPs (Fundo de Investimento em Participações) to provide services to Victoria Capital Partners in respect of the funds that hold, or formerly held, certain of the Brazilian portfolio companies.

Over the last 15 years, Victoria Capital Partners professionals have built long-term relationships with a wide array of Limited Partners worldwide. From family offices to public and corporate pension funds, including academic endowments and sovereign wealth funds, our investors have the following profile:

(1) Others includes High Net Worth Individuals, Other Asset Managers and Financial Institutions.

When choosing a name for our firm we understand we should identify one that could truly reflect the culture and the mission of our organization as well as the special characteristics of the region in which we operate. In addition, since we are part of a globalized industry, we needed to have an easy name to pronounce in many languages. This was an essential part of our search for a brand that can identify our firm.

Victoria was the name of the only ship that completed the first circumnavigation expedition between 1519 and 1522. On August 10, 1519 five ships; Trinidad, San Antonio, Concepción, Victoria and Santiago set sail under the command of Ferdinand Magellan ( Fernando de Magallanes/Hernando de Magallanes/Fernão de Magalhães). On September 6, 1522 the remaining crew of Magellan’s voyage arrived in Spain aboard the only surviving vessel, Victoria, almost three years after their departure. During the course of this expedition Magellan anchored near present-day Rio de Janeiro to resupply the fleet, sailed south to Rio de la Plata and finally established the first settlement in Puerto San Julian in southern Argentina, where they decided to spend the rough winter getting ready for the next phase of their trip. While in Puerto San Julián, they interacted with the native population, which they named Patagones (from the Spanish word “pata” which means the leg of an animal) because they appeared to have large feet, when in fact they just wore shoes made of animal skin that left large footprints. This is the origin of the name of today’s Patagonia region, the southern part of Latin America.

After the winter Magellan continued with his expedition sailing through a passage that he called Estrecho de Todos los Santos as his fleet travelled through it on November 1, 1520 or All Saints’ Day. That strait is now called Strait of Magellan. On November 28 the fleet entered the South Pacific, Magellan named the Águas de Mar Pacífico (Pacific Ocean Waters) because of its apparent stillness. After this the fleet sailed northwest reaching Guam, the Philippines and Brunei. Later the expedition sailed west through the Indian Ocean and finally rounded the Cape of Good Hope in southern Africa on May 6, 1522. From there, the Victoria sailed all the way back to Spain.

So, Victoria represents the successful journey through the emerging markets of South America that we constantly undertake. Similar to Magellan, we expect to bring capital from the developed world, invest it in the fast growing markets of South America and return it safely and profitably back to our investors. Magellan’s crew, especially the one from Victoria, symbolizes the triumph of careful preparation, perseverance, discipline, a clear sense of mission and a relentless focus of solving the problems and capturing the opportunities that the expedition presents. Most importantly, Magellan’s obsession with accomplishing the mission established by his King reflects our irrevocable commitment with our investors and partners to achieve superior returns by managing their capital with the highest professional and ethical standards of the industry. 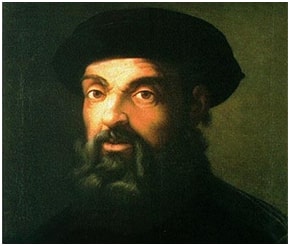 – Ferdinand Magellan was born in Sabrosa, Portugal in 1480. He later obtained the Spanish Nationality in order to serve King Charles I of Spain.

– He was commissioned by King Charles I to search the westward route to the Spice Islands (modern Maluku Islands in Indonesia).

– Magellan captained the first circumnavigation (1519-1522) and became the first expedition to sail from the Atlantic Ocean into the Pacific Ocean.

– He died during the journey in Cebu, Philippines at age 41. 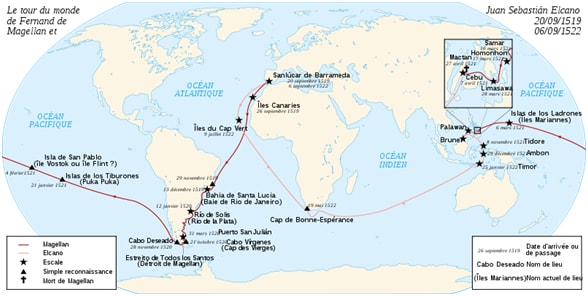 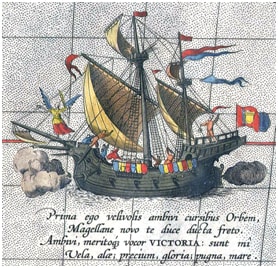 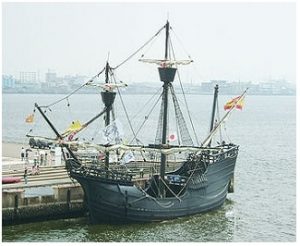 The Victoria was named after the Church of Santa Maria de la Victoria de Triana, where Magellan took an oath of allegiance to Charles I.
Victoria was 85 tons and carried a crew of 43. It returned to Spain with 18 survivors. 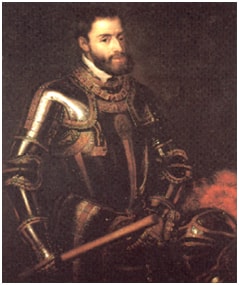 In order to motivate Magellan to undertake the expedition King Charles I established one of the oldest Partnership Agreements in the region granting:

I)- Monopoly of the discovered route for a period of ten years.
II)- 20% of the gains of the travel.
III)- Their appointments as governors of the lands and islands found, with 5% of the resulting gains.
IV)- The right to levy one thousand ducats on the upcoming trips.
V)- Granting of an island for each one, apart from the six richest, from which they would receive a fifteenth.